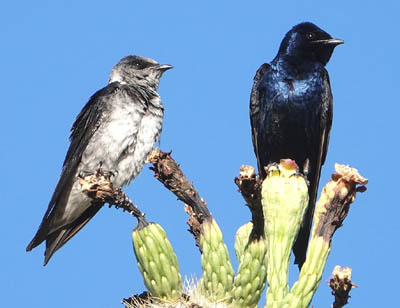 Desert Purple Martins are a fascinating and vastly understudied subspecies of the general Purple Martin species. They are different from the more familiar Eastern Purple Martins physically and behaviorally, and despite these differences, they have rarely been the focus of scientific investigation. Basic knowledge such as average clutch size, exact timing of nesting and average height of saguaro nest cavities are unknown. There is so much left to discover about these birds!

The goal of Tucson Audubon’s Desert Purple Martin Project in 2020 is to document saguaros and specific nesting holes and note their height and orientation. Documenting breeding behavior is another goal of the study this year and into the future. Tucson Audubon could not have launched this project without the amazing help of birders who reported sightings and dedicated volunteers who recorded detailed observations. Thank you!

See below for the different ways you can contribute data to the Desert Purple Martin Project.

1. Join Tucson Audubon’s Community Science Purple Martin Project Survey Crew. Participants will have the opportunity to survey nesting colonies of Desert Purple Martins in publicly accessible areas or on their own properties if applicable. We may also have group excursions into larger areas to look for colonies. Join the team here.

2. If you see or hear Purple Martins anywhere in Southeast Arizona please report them here or enter your sightings into eBird.org

3. Report a nesting colony of Purple Martins. Desert Purple Martins are loosely colonial with multiple pairs forming a nesting community in a stand of saguaros, often in excellent Sonoran Desert habitat. If you know of a nesting colony on your own property or in an area that is accessible to the public please let us know here. We do have several endoscopes and long poles we can use to peek into nests and gather data!

4. Find a feather from a Purple Martin. If you find what you believe to be Desert Purple Martin feathers near a known nesting location or a dead Purple Martin please let us know immediately. We have partners that can perform lab analysis on these feathers and learn about the genetics of this distinct subspecies and possibly determine where the bird wintered or its migration path using stable isotope analysis. You could be a part of an important scientific discovery! Let Jennie know if you have a feather by contacting her at jmacfarland@tucsonaudubon.org 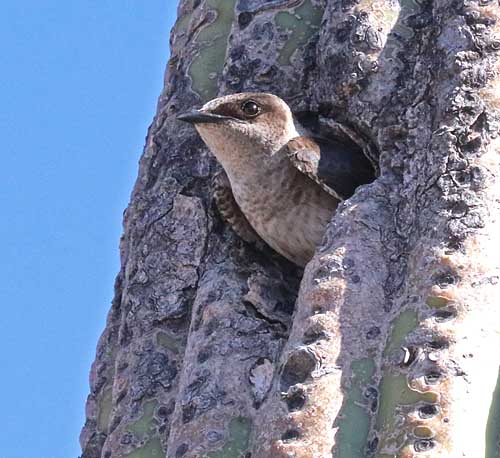 Desert Purple Martins have a very different strategy for nesting than the rest of the species. They have never been documented using human made nesting structures and nest almost exclusively in cavities in saguaros in Arizona or in cardon cactus in Mexico. According to the Arizona Breeding Bird Atlas, Desert Purple Martins have the following breeding time frames: They become common in breeding areas around mid-May and are often observed defending nesting saguaros throughout June. Observations of birds carrying nesting material in June seem to be linked to nest site investigation and guarding behavior of preferred saguaros instead of actual nesting. They don’t lay eggs until early or mid July based on observations in the Tucson area. Young have been detected in nests from July 30 to August 21.

Late August into September, Desert Purple Martins begin to gather into larger groups and prepare for their fall migration. Large groups have been documented gathering together in the evenings to communally roost in the Tucson area and Tucson Audubon will be soliciting observations of this behavior in late summer into autumn. By early October, many of the Purple Martins have left Arizona but some are frequently seen in smaller numbers into late October.

The 2020 season is piloting the use of endoscope cameras on long poles to peek into active saguaro nests. Stay tuned for an update on what we find!