Tucson Audubon Board of Directors 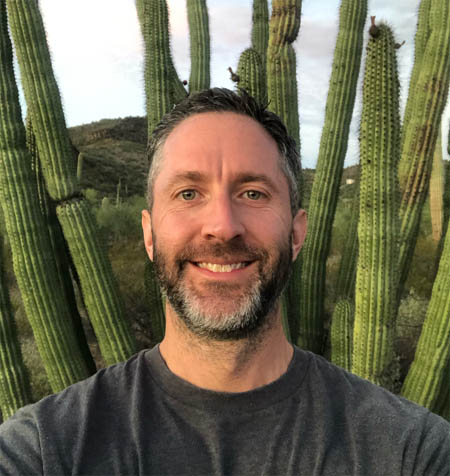 Michael is an Assistant Professor of Aquatic biology at the University of Arizona. Originally from California, he earned his PhD at Oregon State University, where his research focused on stream ecosystems of the Madrean Sky Islands and Sonoran Desert. He is well-known for his work on Santa Cruz River Heritage Project, and his beautiful photos of dragonflies. His research topics include Arid Lands, Conservation Biology, Invasive Species and Population and Community Ecology.

Michael serves as the faculty advisor for the UA chapter of the Society for the Advancement of Chicanos Hispanics and Native Americans in Science, a national Diversity in STEM organization. Michael is a partner on our Santa Cruz River Heritage Project work and has contributed to the Vermilion Flycatcher in the past year.

Michael has a hard time choosing a single favorite bird, but says that Curve-billed Thrashers are pretty hard to beat. “I could watch them goofing around through the leaf litter and be entertained for days!”

Colleen is a partner with the firm Gadarian and Cacy, PLLC, a Tucson law firm specializing in professional Tax Strategy, Estate Planning and Asset Protection law.

Richard started birding as a child in Minnesota 70 years ago. After a brief interlude at Harvard, where he majored in caving, mountain climbing, winter mountaineering and economics, he began birding again in Washington DC with the Maryland Ornithological Society. He was one of Chan Robbin’s volunteers in establishing the first Breeding Bird Surveys. Bribed by the Nixon administration to leave town with a fellowship to Stanford, he moved West in 1969. He worked at Stanford Research Institute, where he co-authored “Solar Energy in America’s Future” and led field trips for the Santa Clara Valley Audubon Society. He became President of the San Francisco Bay Bird Observatory and expanded his birding to Latin America. He has birded throughout the Neotropics and in Africa, Australia, Antarctica, India, China and Europe. He hopes to ultimately see at least half the birds of the world. He and his wife Pat now migrate between homes in Tucson and Lake Tahoe depending on where the birds are.

Tricia never wound up with a career but instead had a variety of jobs and life experiences. She’s been a bookkeeper, a typist, a proofreader and then a test analyst for a defense contracting company. She was a tour guide for trips into Mexico’s Copper Canyon for Elderhostel (now Road Scholar). The trips focused on Mexican and railroad history as well as the history and culture of the Rarámuri (Tarahumara) natives.

Secretary of the board for Tucson Audubon, member of the board for Friends of the San Pedro River, president of the now-defunct Huachuca Audubon Society, treasurer for Sky Island Unitarian Universalist Church, Water Sentinel with Sierra Club Water Sentinels, Steering Committee for Sustainable Water Workgroup.

When Huachuca Audubon Society disbanded in May 2016, Cochise County became part of the “assigned” territory for Tucson Audubon Society. That was a huge amount of land, although not too many people, to absorb. I was invited to be on the Tucson Audubon board to help with that effort, and to help protect the San Pedro River. That work still continues! Photo by Mark Levy,

Laurens has been passionate about (or maybe even obsessed with!) birds and birding for practically his entire life. His interest in birding was inspired by his parents, whom he delighted with his identification of an Indigo Bunting at the age of four (pronounced “Indian Bunny”). But birding has always meant more than just identifying the bird and moving on. Even as a young teenager, he sought a deeper connection with the birds. He wanted to get to know the birds, observe & study their plumages, behaviors, habits, and habitats. Once familiar with birds in his home state, he wanted to see more of the birds, and has birded throughout the United States from Washington to Florida, Maine to California, Texas, Alaska, and off three coasts. Laurens began visiting the premier birding destination of southeast Arizona in the early eighties and became a resident of the area in 1999.  Though he is most captivated by birds, Laurens is also enthusiastic about all creatures in the wild, whether they are covered with feathers, fur, scales, or some sort of exoskeleton. Today Laurens is a birding guide and wildlife photographer.  He formed Desert Harrier Guiding Services in 2007 and conducts day guiding & private tours for individuals & small groups throughout southeast Arizona and beyond. Guiding and sharing his photographs is Laurens’ way of helping others connect with nature. Laurens is a voting member of the Arizona Bird Committee, volunteers for Tucson Audubon and the Friends of Madera Canyon, and is an avid eBirder and regional eBird reviewer. He lives just outside of Madera Canyon near Green Valley with his very tolerant wife and the most precious cat in the world.

Bob is an Arizona native who grew up in Payson. Bob enjoys time in the outdoors as a hunter, angler, birder and volunteer archeology site steward. 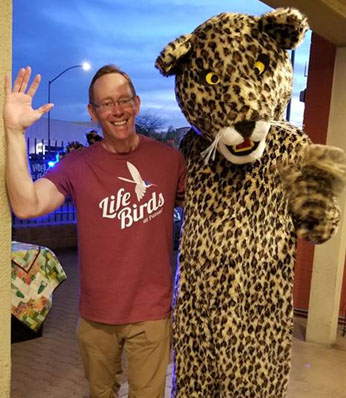 Keith got an early start as a birder when, in middle school, he had a section in science class focused on birding.  He discovered he could have birding adventures year round and was hooked. Keith grew up in Michigan and attended Grand Valley State University where he majored in Sociology and worked as a social worker.  He moved to Tucson in June of 2003 where he currently is a devoted caregiver, when he’s not birding.

Linda’s education includes a Bachelor of Science in Nursing from the University of Rochester, and a Juris Doctorate from the University of Arizona, where she graduated Summa cum Laude and was elected to the Order of the Coif. A recently retired partner at the law firm of Lewis and Roca, LLP, Linda was a member of the firm’s Real Estate and Finance practice group. Her law practice focused primarily on commercial real estate, business and natural resources law. Linda has served a number of board roles, including: President of the Tucson chapter of Commercial Real Estate Women (CREW) and member to the board of directors of the Pima County Sports and Tourism Authority, the Arizona Center for Law in the Public Interest, and the Wilderness Land Trust. Early in her career, Linda worked for the Arizona Department of Water Resources and she’s maintained a connection to water policy issues in Arizona. Linda has been a member of Tucson Audubon Society since 1976 and lives with her husband Michael in Tucson.

For a long period I was what you might call a “lapsed birder”. I started birding in college with a boyfriend who became my husband and we traveled all over the United States while he was in the service; leading to a pretty comprehensive bird list. Then suddenly, other life activity got in the way and for about 25 years birding was shelved. In the late 80’s I was introduced to an avid woman birder at an environmental conference and the passion came back. My work career involved many executive jobs, some of them key environmental positions, which only reinforced my understanding of the need to protect important habitat around the world. It’s (the birding) led to many trips to many countries, a joy of seeing both new and revisited birds and of course, to becoming active in Audubon chapters, both here and in Virginia.

Deb has been an elementary and middle-school teacher/librarian for most of her professional career. Noting that children rarely engage in outdoor activities, Deb has made it her mission to mentor students and provide opportunities for them to enjoy and appreciate southeast Arizona’s great outdoors. With the support of Tucson Audubon, she has developed the Trekking Rattlers, a local middle school student group that offers monthly nature outings to underprivileged youth. Deb offers birding opportunities to various youth groups in the Tucson Valley.

Cynthia began birding when she was 10 by participating with her girl scout troop create a bird-watching badge. In the 90’s she began birding with family, friends and with bird walks in various Ohio regions. Since 2010, she has enjoyed Tucson Audubon bird walks and short trips. Beginning in 2016, she has participated in the Birding Festival, serving as a volunteer in 2017-2019 and at Meet your Birds events. She served on the Gala and Finance committees in 2016-2017, and joined the board in 2018. She now serves as Treasurer and Search Committee co-chair.

Cynthia founded her accounting firm in 2007, focusing on not-for-profits, small companies and individuals, providing accounting, tax planning and reporting services, calling upon her Kent State University (BA degree in accounting with honors) and her experience at one of the “Big Eight” accounting firms (Arthur Andersen). Cynthia is also a Physical Therapist and commercial hot air balloon pilot, and enjoys hiking, birding, biking and swimming.

Mary was raised in a small town in northern Pennsylvania, where she had a forest mountainside to explore adjacent to her home. When she was a small girl, her grandfather had responsibility for her daytime care, and their walks in the woods together developed her love of the peace, beauty and complexity of the natural world.

Mary became an environmental chemist through studies at Newcomb College of Tulane University, St. Andrews University in Scotland, and the University of Georgia where she received her BS degree with honors. She has worked in environmental and medical research, environmental compliance, public participation and public policy related to environment at EPA, Bowman Gray School of Medicine, Baylor College of Medicine, the Tennessee Valley Authority, and several consulting firms. For several years she owned and operated Mary Walker & Associates, Inc., an environmental consulting firm located in Chattanooga, Tennessee, where she also founded the quarterly magazine EnviroLink®, serving Tennessee, north Georgia, and northeastern Alabama. The magazine highlighted industries, local governments and non-profit organizations that took action creatively, individually and cooperatively to promote sustainable development and enhance environmental quality in the region.

Mary was a member of the Board of Trustees of The Nature Conservancy of Tennessee for ten years and chairman for two years. She has been chairperson of the Mayor’s Advisory Council for Environment in Des Moines, Iowa, Director of the Chattanooga Task Force of the Tennessee Toxics Program, and a member and officer of the Chattanooga-Hamilton County Air Pollution Control Board. She was a director of Audubon Arizona from 2010 to 2013.

Mary is an instrument rated, multi-engine private pilot with 25 years of flying experience. In 1997 she and her husband retired and moved to La Cholla Airpark in Tucson, where her favorite activities include birding, photography, and playing and teaching mountain dulcimer. The Walkers have two sons: Alan, a deputy clerk of the Superior Court in Tucson, and Ross, an assistant professor of electrical engineering at the University of Utah.