A bird born to run, this roadrunner can outrace a human.

desert and mountain, along the Loop path in Tucson

The roadrunner’s distinctive X-shaped footprints are used by Native American and Mexican cultures as sacred symbols to ward off evil. The X shape disguises the direction the bird is heading, and is thought to prevent evil spirits from following.

One of the most famous birds from popular culture, one might think the Greater Roadrunner doesn’t need an introduction. But no matter how many times you’ve seen the cartoon depiction, this bird remains intriguing and biologically fascinating. The species is found in deserts and arid grasslands across the southwest and northern Mexico and has a number of adaptations that allow it to thrive in these hot and dry habitats. They can flutter the unfeathered area under the chin to shed heat (gular fluttering), maximize water intake from the prey they eat, and also conserve water by secreting concentrated salt through eye glands, a trait shared with seabirds. On cold mornings, roadrunners sunbathe by raising their back feathers to expose heat absorbing black skin to the sun! Like woodpeckers, owls, parrots, and osprey, roadrunners have zygodactyl feet (two toes forward and two toes back) that likely give them greater dexterity when running at speeds of up to 20 mph.

Also known as Chaparral Cock, Snake Killer, and Medicine Bird, or in groups as a “marathon” or “race,” Greater Roadrunner looks unlike any other bird in the US (although there is the similar Lesser Roadrunner in southern Mexico). At about two feet in length from bill tip to the end of that very long tail, roadrunners could actually be mistaken for a tiny velociraptor patrolling the desert floor using short, low flights and their parallel-to-the-ground running style. Their upperparts are beautifully streaked with slightly-iridescent feathers, and adults have stunning dark blue, white, and orange orbital skin behind the eyes that is usually hidden from view until the large blue-black crest is raised.

Contrary to popular belief, Greater Roadrunners don’t say “meep meep,” but they do make unique sounds you’ve likely heard before and never realized who made them. Listen for their dovelike, downward slurring cooing, rapid barking that resembles coyote yelps, and a non-vocal bill clacking sound that is made frequently. Look for them along the Loop trail in Tucson where they are often seen searching for prey items that can include just about anything—poisonous animals, including venomous lizards and scorpions, horned lizards (head-first!), rattlesnakes (often in tandem with another roadrunner), small mammals, frogs, toads, birds, and carrion. Considering roadrunners have been known to jump straight up to grab bats and hummingbirds out of the air, it’s a good thing these ferocious predators are not any larger—humans would be in serious trouble! 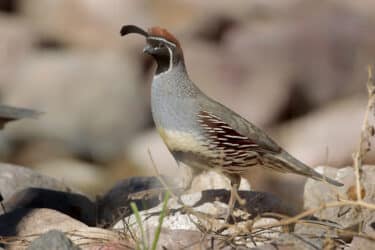 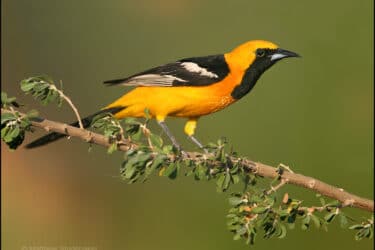 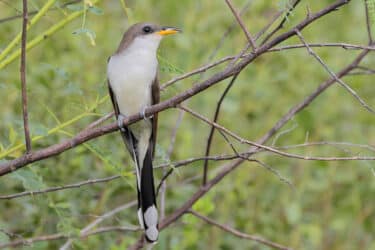