Sometimes referred to as the “Mexican eagle,” this ground-dwelling falcon is quite a sight to see.

Although Crested Caracaras are in the falcon family, they regularly walk on the ground, so don’t forget to scan the ground for them.

If you come upon a large, hawk-like bird with a huge orange bill strutting through a field on long yellow legs, don’t worry, you’re not seeing things—this is another unique bird found in Southeast Arizona. The Crested Caracara looks like a hawk, often acts like a vulture, and is technically a large, tropical falcon. Sometimes referred to as the “Mexican eagle,” this ground-dwelling falcon is quite a sight to see. It has a mostly black body, large black cap, and some white here and there, but it’s the large bi-colored orangey-red and blue-gray bill that really gets your attention. If you see it in flight, you might indeed mistake it for a Bald Eagle as it flies with long, straight, flat wings, and appears to have a white head and mostly white tail—if not for those large white wing patches.

Crested Caracaras are non-migratory and resident in the wildly different habitats of Baja California, Arizona, Texas, Louisiana, central Florida, much of Mexico, and down into the Amazon River basin! They are not shy and will often perch atop a tall tree in prairies, savannas, desert scrub, pastures, and seashores. Wrongly viewed as primarily a carrion feeder, caracaras are opportunistic foragers, taking a wide variety of live prey such as turtles, fish, insects, frogs, lizards, snakes, small birds, and small mammals, as well as carrion.

Crested Caracara is the only falcon that builds its own nest, and in Arizona this is usually in the crotch of a large saguaro cactus. They are faithful to a nest site and might return to the same tree year after year. The best spots to find caracaras near Tucson are on the Tohono O’odham Nation along Highway 86 and in the cultivated fields of the Santa Cruz Flats area, and be sure to look on the ground! 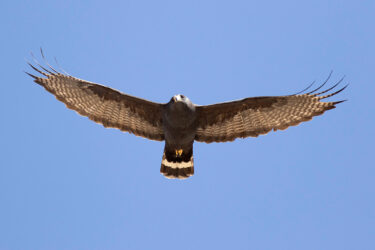 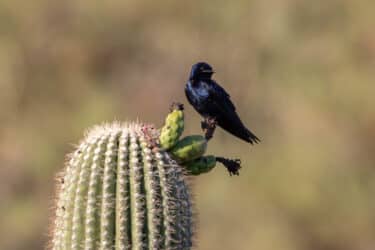 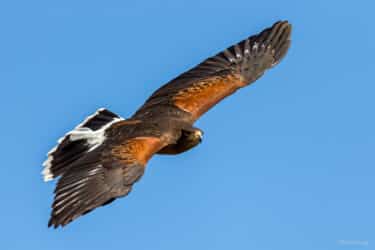