Welcome to Tucson and the Sky Islands!

Weldon Heald coined the term “sky islands” in 1967 to describe mountain ranges that are isolated from each other by intervening valleys (or “seas”) of grassland and desert. These Sky Islands host a combination of habitats found in very close proximity nowhere else in the United States that translates directly into a diversity of wildlife, which is easily observed in the number of bird species one can see here!

The monsoon rains that come in July and August make for a kind of second spring. Many birds wait exclusively for this time of year before singing, nesting, and generally becoming more observable. At the same time, southbound migrants are arriving. This is when hummingbird numbers and species diversity peaks – as many as 15 species are possible! Migrant warblers, buntings, and other passerines are beginning to arrive. As if all of this weren’t enough, rarities from south of the Mexican border often show up, as well!

See map of these places 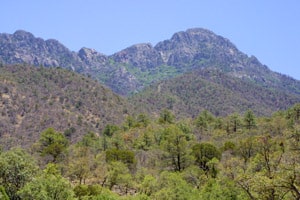 At 9157 feet, Lemmon is the highest peak in the Santa Catalina Mountains. Vegetation ranges from saguaro-palo verde desertscrub at its base to mixed conifer forest at the summit. The drive from Tucson is via the winding paved Catalina Highway with frequent precipitous slopes that give majestic views of southern Arizona. Many miles of trails are available, traversing lush mountain meadows, dark forests and open woodlands of pine and oak. A remarkable variety of birds can be found April through September, including Red-faced, Olive, and Grace’s Warblers, Hepatic Tanager, Greater Pewee, Zone-tailed Hawk and many more.

Home to some of the best birding in Arizona. The superlative quantity and diversity of hummingbirds are probably unmatched in the U.S. and nowhere else north of Mexico are Buff-breasted Flycatchers more common. Spotted Owls and Elegant Trogons are also highlights. The main birding areas are in canyons on Fort Huachuca and the Coronado National Forest and at privately-owned feeders.

Madera Canyon is one of the most famous birding areas in southeast Arizona. This canyon’s habitat consists of riparian woodland along an intermittent stream, bordered by oak woodland and mountain forests. The road enters through desert grassland and ends above the oak woodland, where hiking trails lead up the “sky island” through pine-oak woodland to montane conifer forest and the top of Mt. Wrightson (elevation 9453 feet). The spectrum of birds found in these varied habitats includes four tanagers: Summer, Hepatic, Western and Flame-colored as an occasional breeder. Hummingbirds, owls, flycatchers and warblers are also very well represented in this area. 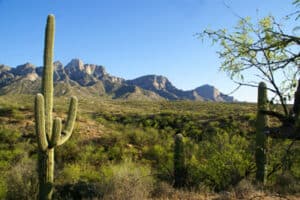 This is a 5500-acre park nestled at the western foot of the Santa Catalina Mountains. Vegetation includes saguaro and palo verde desertscrub, mesquite woodland along washes and scattered ash, sycamore and oak trees along an intermittent stream. The park has spectacular views of the mountains and several hiking trails. It is an excellent place to see many Sonoran Desert birds and is a recommended year-round birding site.

Located in west Tucson, this created wetland attracts birds with not-so-sweet urban effluent water. The 60-acre treatment and recharge project was designed to provide wildlife habitat and nature viewing, with open-water ponds, cattail and bulrush marshes, and cottonwood and willow habitat. This bird magnet was opened to visitors in March 1998. Winter and migration are the best seasons but summer mornings and evenings can be good also. 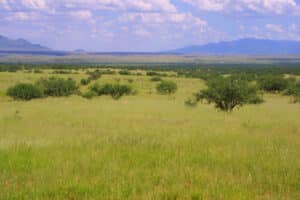 In 2000, the 45,000-acre Empire Cienega Resource Conservation Area was expanded and renamed Las Cienegas National Conservation Area. Starting in 2010, the BLM began working to restore the high desert grasslands to their original condition by removing much of the mesquite that invaded the arroyos during the cattle boom years. Several areas are now being used for the reintroduction of endangered black-tailed prairie dogs. Varied habitats including a perennial stream with cottonwood-willow riparian areas, cienegas (small marshlands), juniper-oak woodlands, sacaton grasslands and mesquite bosques support diverse bird species.

Nine miles of dense riparian habitat between two railroad lines were acquired by Pima County in 1986 and set aside as a nature preserve. The Preserve is significant on a regional basis due to the presence of perennial stream flow and lush riparian vegetation. In combination, these conditions create an area with very high values for recreation, scenic quality and wildlife habitat. It is a summer home for Yellow-breasted Chat, Yellow-billed Cuckoo, Northern Beardless-Tyrannulet, Bell’s Vireo, Summer Tanager and Yellow and Lucy’s Warblers. It is also an excellent site to look for migrants and eastern vagrants.

California Gulch is the most accessible place in the U.S. to see Five-Striped Sparrow, yet it is no easy place to get to. A rough road and short, steep hike lead to sparse riparian vegetation at the canyon bottom. The sparrows inhabit the hillsides. Other interesting birds include Zone-tailed Hawk, Montezuma Quail, Northern Beardless-Tyrannulet and Varied Bunting. There are scattered reports of Buff-collared Nightjar.

The refuge offers excellent birding year-round in cottonwood riparian, wetland, sycamore canyon and mid-elevation grassland habitats. Formerly a large cattle ranch, Buenos Aires joined the Refuge system in 1985 to prevent the extinction of Masked Bobwhite. The sycamore-lined Brown Canyon with elevations ranging from 3300 feet to 4700 feet, traverses mesquite grassland, sycamore, oak and juniper. Montezuma Quail, Buff-collared Nightjar, Acorn and Arizona woodpeckers, Sulphur-bellied Flycatcher, Painted Redstart, Green-tailed Towhee, Hepatic Tanager and Scott’s Oriole are among the sought after birds found in the canyon. Up to seven species of hummingbirds are easy to watch from the porch at the Visitor Center.

See map of these places